Role / Head of Design | Responsibilities / UX, information architecture, prototyping, research
The ‘future’ as a concept is a very big idea. Yet far from being scared off by the idea of it, I decided to embrace the challenge of making the Blinkist apps ‘future-proof’ and rock-solid from the foundations.

This would mean being able to deliver an experience to customers that would be reliable and wonderful to use for time to come, even as the product evolved. 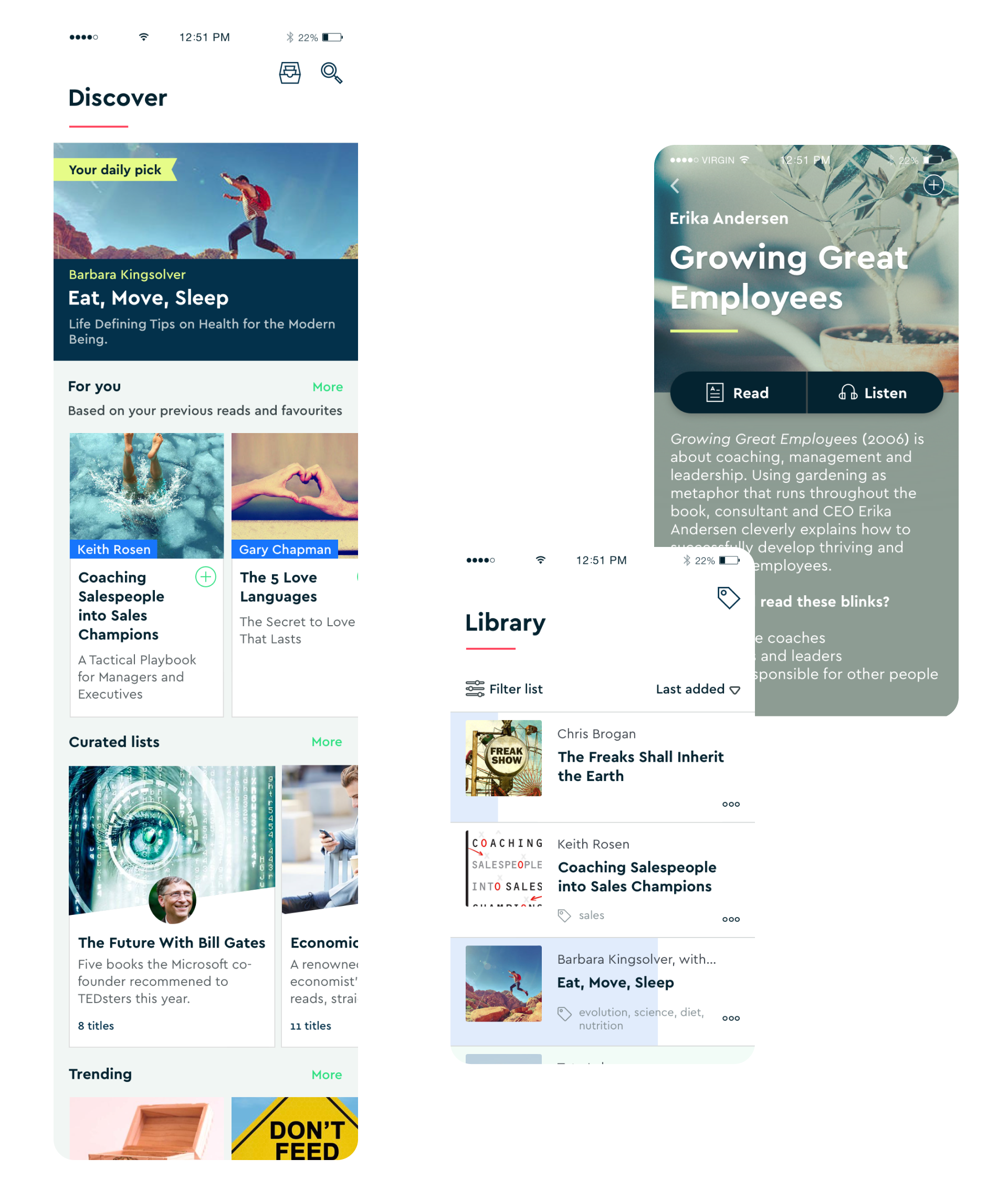 The Blinkist app prior to this update suffered from a few issues. For example, although we had introduced more weighty features like an audio, the information architecture (IA) hadn’t been reconsidered in a way that better integrated this change. This was one of many issues that compromised the quality of the customer's experience.

As a result, the product was becoming less easy to use for users (backed by research and data) and the current state made it harder to design a truly effective andwell-crafted product. We needed to create a solid foundation to deliver a more seamless and enjoyable experience for customers.

Digging up the dirt

I thoroughly audited the app to understand existing paradigms, the user journey(s), visual design issues and more. Through this process I identified over 30 issues and developed more concrete thoughts on the state of the app. My varied findings ranged from issues such as the information density on key screens to existing paradigms in the app being re-used in the wrong contexts. 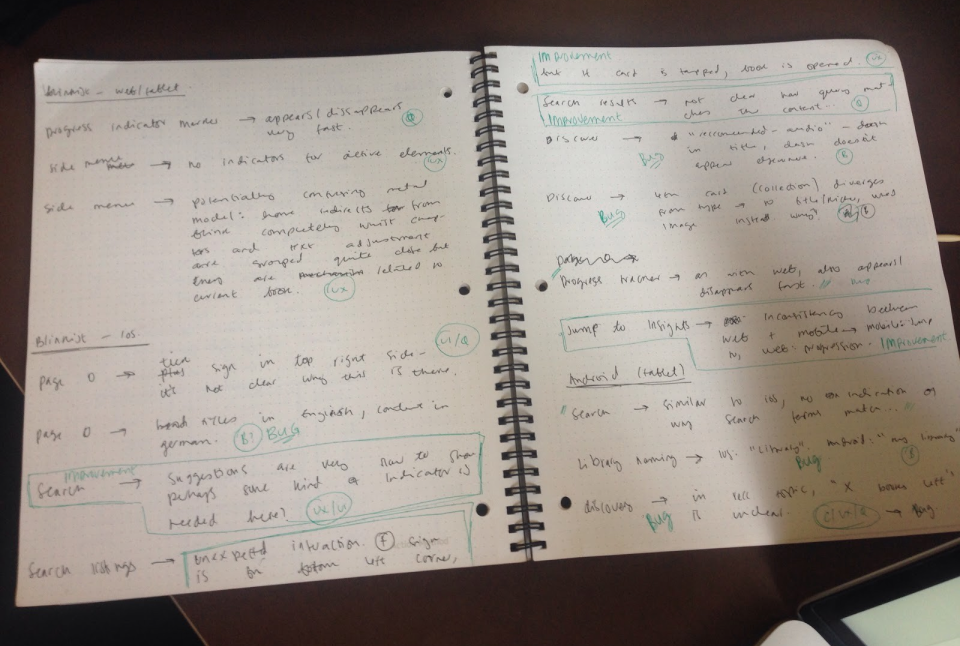 To be more pragmatic and effective at addressing the problems, I bucketed the issues into themes. Then further narrowed that down to 3 high impact opportunity areas that could provide value for customers. This were the book card component (one of the most important components), the profile and the library. For each area, I analysed a few things, such as:

With the opportunity areas defined, I moved on to conducting a card sorting study, running the research process from end-to-end and uncovering meaningful insights that could improve IA.

The study provided a clearer sense of how people logically grouped things, exposing some areas where we might've created the wrong navigational patterns or mental models.
‍
This helped to give us more direction on how we could create a seamless experience that would allow our product to scale.

As part of this process, I developed several hypotheses. By designing through them, I was able to open up discussions with leadership and stakeholders about how Blinkist could evolve and improve.  One key idea centred on the book card component being an object with its own lifecycle. 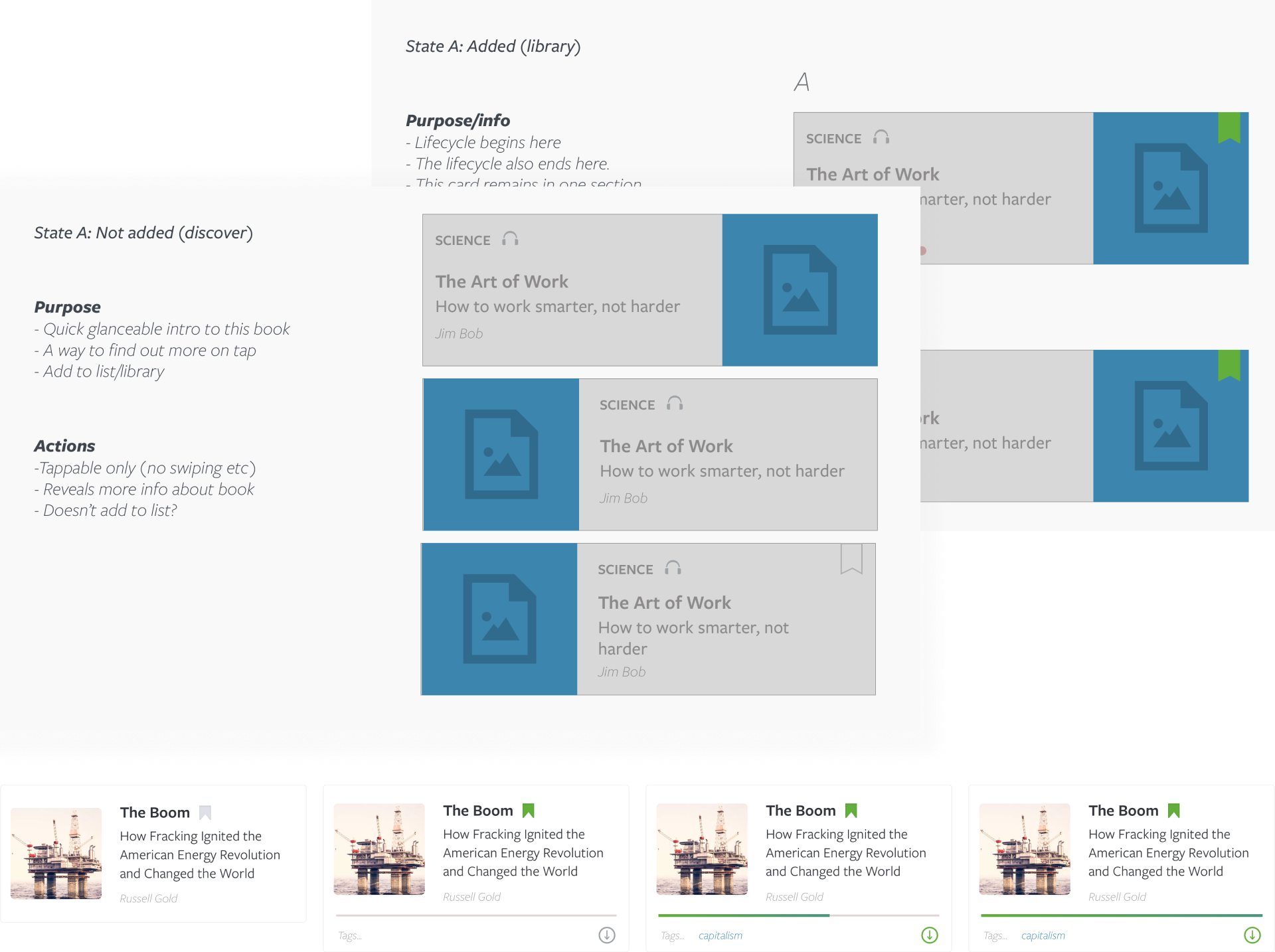 This object appeared in multiple steps in the customer journey (discovery, search, library, profile etc), so by mapping its various appearances along that journey instead of just a visual element, I could better design for how it needed to evolve and adapt as the reader moved through the app.

In addition to exploring this concept, I iterated through a wide range of ideas and mock-ups based on the card sorting study and other inputs. This helped derived a new vision of the product that would allow us to scale and address known issues. 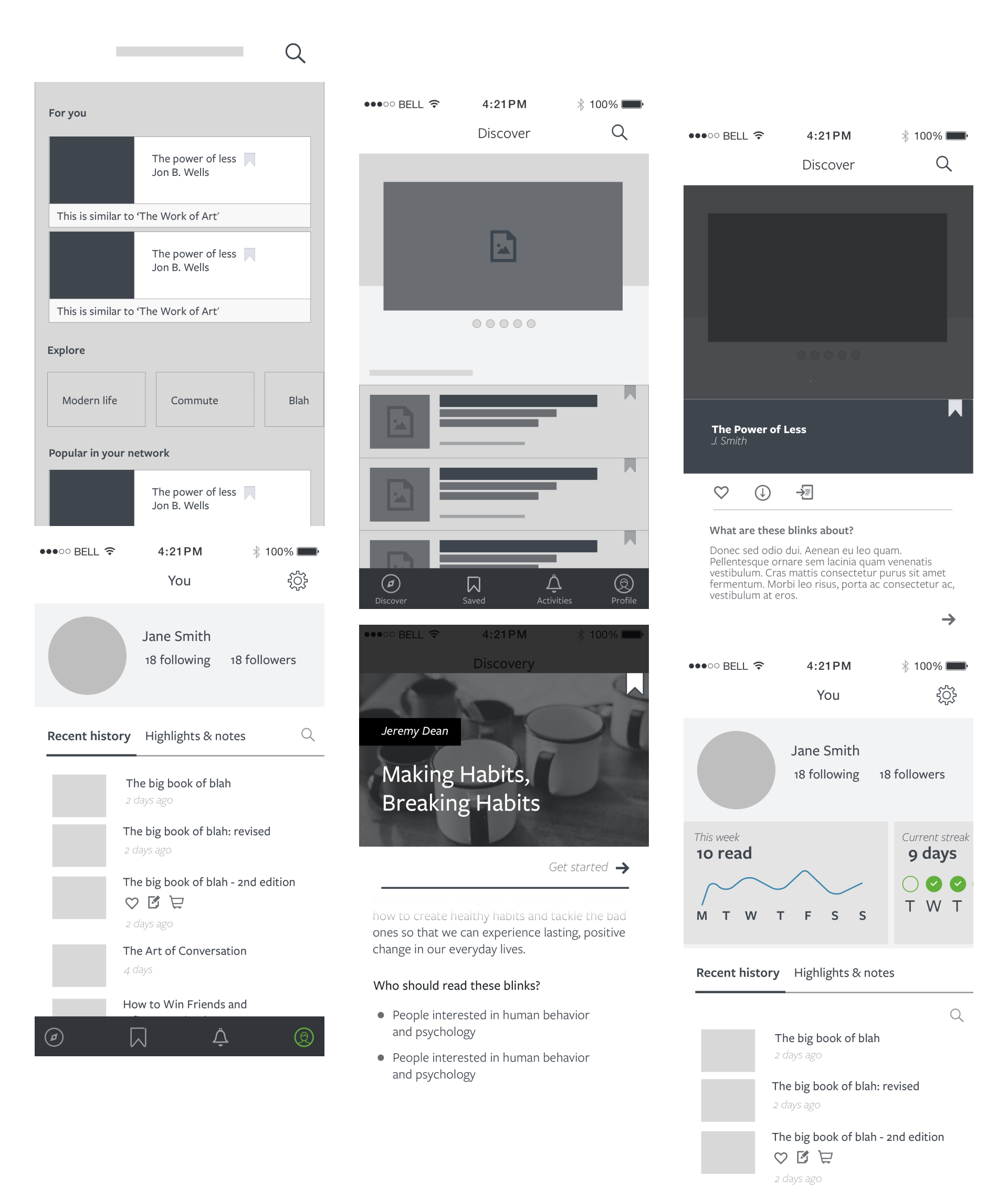 Bringing the work to life

This work later coincided with Blinkist's rebranding project. As part of that project, I was also working to define the Blinkist art direction and visual design. I experimented with visual treatments on this work to produce designs that felt more tangible and exciting.

The rebrand project had a tight timeline, so I took a pragmatic approach to testing. I relied on internal testing often for quick feedback on certain aspects of these concepts and set-up testing with external participants at key junctures.

As some net-new functionality and interaction changes were proposed, I coded interactive prototypes to represent the ideas visually (low-mid fidelity). This helped centre discussions with interviewees, stakeholders and later developers.

The updates to the book card lifecycle, profile and library, as well as the full visual redesign, were shipped with the new brand roll-out. During development, I worked closely with engineers to see this work come to life, often pairing to sweat the final details, such as the read/listen button micro-interaction (still in use today, as of 2022) 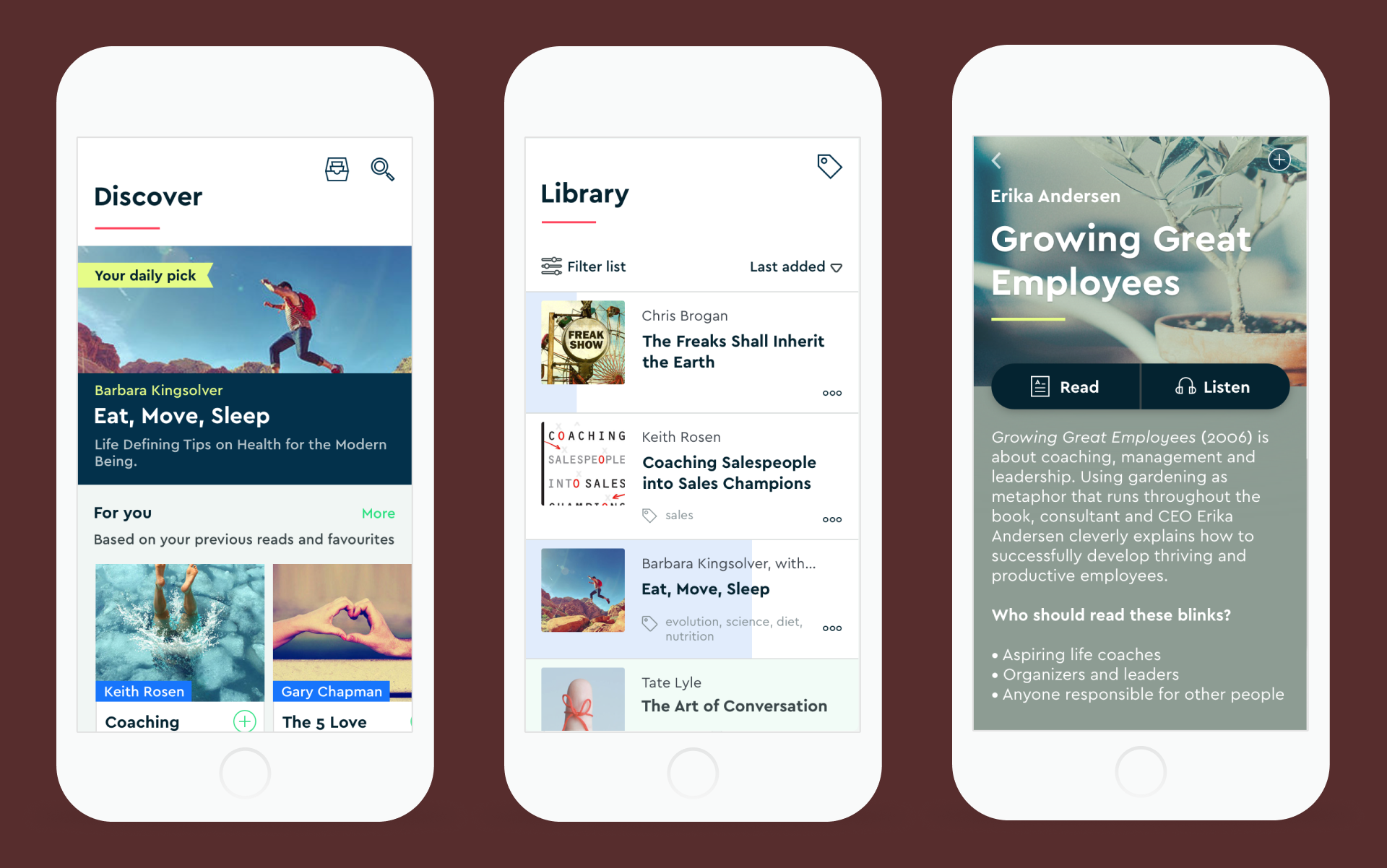 Although the Blinkist brand update took place almost in parallel to this work. That project had a tight timeline, which meant that we sacrificed the chance to  learn iteratively and to roll out certain improvements.
‍
However, some of the improvements identified, in particularly certain mental models and IA changes, eventually made their way into the app some time later on. A few years after this project, we kicked off a similar initiative on the team. Some similar findings were once again uncovered, leading to the integration of these changes. Some findings are evergreen 🌱

Since these updates were part of a broader rollout, it was harder to measure the effects of these changes quantitively later. Therefore, we turned to qualitative indictors. Overall, we received positive customer feedback about the changes made and used it to pinpoint where we fell short and could iterate.

‍Impact:  This work helped to serve as a solid foundation for future designers, one where we could more easily design for — and meet — customer needs and business objectives. The foundation set with this project can still be seen in the Blinkist app today, over 4 years later.

‍Recognition: We received recognition and features from Apple, landing App of the Day in App Store (various regions) multiple times and a Google Material Design Award in 2017.
← Driving Impact through Intentionality
Fresh Look for Bite-Sized Learning→